from the beginning of times

Yes, that was a great idea of you, Intelligent Design. You have figured that out pretty well on yourself.
Except that you are on the wrong side.
It's not about physics. It's about psyche.
It's about the soul.
Your soul.

Yes, I must admit, Jehovah has brains.
The business which he is perpetrating here - and which I'm happily to join, but not in an evil manner - is his own discovery and steady system building. His industriousness and his dedication are beyond doubt.

We had that quarrel, he built the fence, and then he got some visitors. I found out what he was doing, showed some visitors to my place ... in short, you know what happened. Jehovah became angry, yes, for I the Lord your God am a jealous God.

But he's also a "good" business man.
So, shortly after these troubles he came to the fence and invited me for a meeting. At his place.
Well, I didn't trust him, but I liked the idea of having a chat with my old companion, so I suggested on the river, in the boat.
» Okay, I'll come and pick you up.
» No, each one in his own boat.

He agreed. And there we were, on the river, not in the night but in broad daylight. A bit uneasy, like a divorced couple that meets after a long time of distantiation.
» Long time no seen.
» Better late than never.
» Listen, I don't like you to intermingle with my business.
» I like the company.
» But the discovery, the idea ... it's all mine.
» You don't own these creatures, do you.
» As a matter of fact, yes!

» I admit, I felt a bit lonely, after building that fence. Also useless. I thought: there must be more than me and you. I started to explore the surroundings. And I discovered this river. I crossed it. And I learnt about these creatures and their world. And of their temporary existence, the difference between their marbles and their envelope - being united with their marbles, or drifting at the sea of times, waiting to be reunited. And I decided to take advantage.

He paused for a few minutes, as if he had to think about his next move which, I was pretty sure, he already had considered at length.

» Listen, you leave my guests in peace and now and then I will ask a visitor to go to your place.
» Aha, like a monopolist hey, you take the better part and I'm palmed off with the left-overs.
» Not the left-overs. There are those who do not listen to me.
» After the voice test or before?

I liked the conversation, I heard some interesting things.
After he had found the place, he had made himself a landing. The few people who lived there he had scared to death and chased away. But he had learnt them about heaven - and, after I had interrupted his business, also of hell, with the fires, the narrow gate, and the easy road and the wide gate that leads to hell's destruction, that kind of nonsense.

It's here where we enter your idea of Intelligent Design. The word is: whispering, or whisperer. The Holy Ghost is whispering to your soul. Jehovah, inventing his holy spirit, so he hadn't to tell you these stories himself.

And when the day of Pentecost was fully come, they were all with one accord in one place. And suddenly there came a sound from heaven as of a rushing mighty wind, and it filled all the house where they were sitting. And there appeared unto them cloven tongues like as of fire, and it sat upon each of them. And they were all filled with the Holy Ghost, and began to speak with other tongues, as the Spirit gave them utterance.

It is written down by Lucas .. if you believe it ... the story of that peculiar Pentecost, the first one following the crucifying of Jesus, that Jewish rabbi, that got a bit of the track. Not like journalism, the day when it happens, no, some fifty(50!) years later ... if you like to buy that kind of talk.
And my neighor found people, willingly to write down what they felt was true. There it started, all those made up stories about good and evil, the theory, the consequences, the apocalyptic writing. The most prominent of your whisperers being Paul, that crackpot. (He was here a few times. I spoke with him. Always apologizing for being mistaken. I can tell stories about that man ... wowee.)

» There are those who refuse to listen to me. I will not land them safe on Canaan's side.
» Land them safe?! Haven't you noticed the difference between your praising zombies and my gay site. They love it at my place.

I was amused and at the same time angry. I admired this great work of invention, his invention. You could say: Jehovah had reinvented himself. And I had taken advantage.
But the concurrent depicting of my world as the world of the wicked, the world of stench and fire and chains - me, being the monarch of malebolge under whose black survey little men do kneel with awful fear ...

Thanks you very much, I said, and I rowed slowly away.

If I were you, I would be more attentive to UFO's. I've learnt through those who come to my place, what UFO means to you. And I can relate the dating of some of these stories to certain periods that I noticed the absence of my neighbor Jehovah ...

to those who on his proffered mercy trod
no more a Saviour, but avenging God

So, beware of UFO's.
Well, you know my advice: you shouldn't consider the hellish ventures, no, as I always say: go for it! 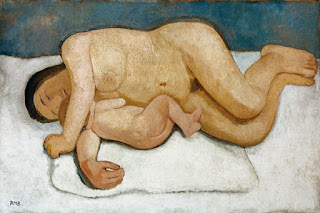