dedicated to the books of James M. Emmerling *)

'Books!' said Tuppence.
'What did you say?' said Tommy.
'I said "books"' she said.
'I see what you mean'
POSTERN OF FATE (Agatha Christie)

I entered the library. Looking at the spines I imagined again entering a kaleidoscope: one book became thousand books. Still, the place was suffused with nothingness. I moved towards one of the bookcases, to examine authors and titles.

Behind me I heard "good morning".
I looked around, no one to see. Strange.

Then, from another corner, again "good morning".
I looked in the direction of the sound: I saw one book moving back from the edge of the shelf, closing ranks. There was a murmur of approval, some books nodded.

I said "buongiorno".
There was a murmur of disfavor.
"Scusa ... Good morning".

The same book moved again to the edge of the shelf: "what do you want?"
"I hear that things are becoming boring here" I said "no one gives me good books anymore, your master told us".
The book sighed: "you are well informed".
"I thought: I'll bring him some books".

I put two books on the table. 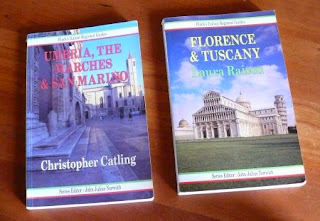 "What kind of books are they?" asked the book.
"One about Umbria, one about Toscana".
"No Italian books here" said the book.
"Actually, It's English" I said "and I think James will appreciate these. It gives him the opportunity to become acquainted with my abiding place and its surrounding areas".
"No Italian books here!" shouted some other books.
"But it's the Blacks' guide, these are ...".

What a stupid thing to do, to mention the black guide.
They became furious. "Black guide" they shouted, Two of them jumped on the table, took the books with them to their place and, with the help of a few other books, they started to rip both books in pieces.

"It's not a black guide. It's the famous Blacks' Guide!" I cried.
It was useless. They didn't listen.

I thought of a line in the St. Matthew Passion
der Vorhang im Tempel zerriß in zwei Stücke
as if they wanted to say: be glad there's not enough wood here, otherwise you would be crucified.

It took some minutes before the fury calmed down.
My first thought was to leave the place, but I was here for James.

I showed it to them. 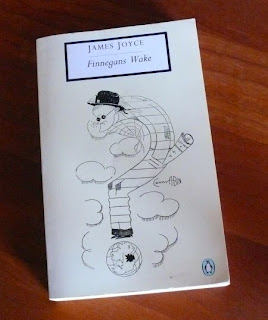 Now it was my time to get angry.
"Listen you scoundrels" I barked, "leaving James Joyce here, means to me leaving a piece of myself behind. Who do you think you are?"

One of the more respected books, one with a lot of dog-ears, spoke to me in a quiet friendly tone. His spine was kind.
"Let me put it this way" he said "when James is around here, then there's James enough here. Do you understand".

I understood.
I pulled another book out of my backpack. 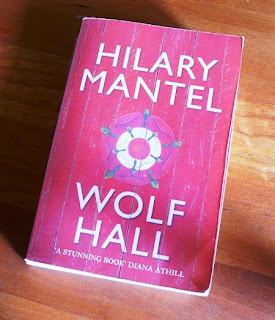 "What is it" one of the books asked.
"It's about Cromwell" I answered "a factotum of King Henry VIII, one of his counselors. And also one of his victims. It is as cruel as it is fascinating".
"May I see it?"

I walked to his shelve. "Have a look" I said.
He (or she, I couldn't tell you) thumbed through the pages.
He seemed quiet interested.

One of the other books asked: "may I see it".
I said "One moment, I'll bring it to you".
It was not necessary. At once, the book swirled through the room, to another bookcase.
"Hey, please, careful" I shouted.

They were really interested.
They seemed to accept it.
I said: "Okay, give it to me, so I can wrap it in paper, and leave it here on the table, a present for James".
I walked to the book thumbing through my book. When I was nearby, he threw it to the other side of the library, and so on, and so on.
It made me thinking of a schoolmaster who tried to catch two naughty boys at once, which was of course a mission impossible, it made us in the classroom snigger.
And I had to cope with hundreds of naughty books!

"Okay" I said, "you win. Give it to James, with my best regards" and I went to the door.

While I was leaving, I heard one of the books say "hey, listen, let one of us read it loudly, so we can all enjoy it".
There was silence. One of them started:

"So now get up."
Felled, dazed, silent, he has fallen; knocked full length on the cobbles of the yard. His head turns sideways; his eyes are turned towards the gate, as if someone might arrive to help him out. One blow, properly placed, could kill him now.
Blood from the gash on his head ...
"So now get up."

Hearing the text of the very first page - a father is kicking his son, the leading character, almost to death - my book became alive and I remembered the vivid account of the burning of a woman, seen by the young Cromwell, just a few days after he was beaten up by his father. I turned on my way, and said "Listen you, there's more stuff like that, look at ...". Not necessary. The reader had already turned to that page and standing in the door opening I heard

The monks were chanting and holding up a cross to the Loller, and it was only when they skipped backwards, at the first billow of smoke, that the crowd knew the fire was set. They surged forward, roaring. Officers made a barrier with staves and shouted in great deep voices, back, back, back, and the crowd shrieked and fell back, and then came on again, roaring and chanting, as it were a game. Eddies of smoke spoiled her view, and the crowd beat it aside, coughing. Smell her! they cried. Smell the old sow. He held his breath, not to breathe her in. In the smoke the Loller was screaming. Now she calls on the saints! they said. A woman bent down and said in his ear, do you know that in the fire they bleed? Some people think they shrivel just up, but I've seen it before ...

With a smile on my face I closed the door of the library.
Yes, as cruel as fascinating ... really, a very good book.
James will be pleased.


*) written for the - supposed? - birthday of James, an old blog friend