This will be a bit of tough stuff, boys and girls. So, be attentive. And don't let me hear about short span of attention. hey. Ask the Afghans, short will not be the word they will use.
And, the apotheosis will bring exaltation.
(btw: I'm not always using simple language, but that's no problem because the poor of spirit are already blessed, for theirs is the kingdom of heaven.)

Where were we. O yeah, eternal singing.
To answer that question we will return to two of your scholars. First the great Nietzsche, then Leonardo da Gioiella, less important, but nevertheless, and then back to Nietzsche.

Nietzsche is the man of das Jenseits. You can think of beyond, but because of Leonardo we stick to Jenseits. Nietzsche has written Jenseits von Gut und Böse. (Beyond Good and Evil). Well, in Good and Evil he was totally misled (or he misconceived it) but das Jenseits he was rather OK. Jenseits means: after this live, das Diesseits, you have something else. Whatever they tell you, or the big nothing. And everyone thought about now and then. And because it was unknown, notwithstanding all the complaints that are rising from depths of misery to heaven, that eternal De Profundis, the then is terrifying.

But Leonardo gave it the big leap. He didn't make it known. But he made it familiar. Because he said, there are two thens. Everyone's thinking about the eternity after life, but there was also an eternity before you were born. And he coined the phrase Vorjenseitszeit and Nachjenseitszeit:
- Vorjenseitszeit is (the time of) das Jenseits before birth
- life is between birth and death
- Nachjenseitszeit is after death.

Back to Nietzsche. He knew that all matter is finite. That's simple reasoning. If there were an infinite number of stars, there would be eternal light. But we have day and night, so that's impossible. Also it is impossible that a star has an infinite number of planets. Because if, at least one (but certainly more) of these planets would intermingle with planets of another star, and you know what that will do: heaven will break loose and that brings destruction.

Now the lest easy part, and then we are back in joyful waters.
Suppose you have three marbles, color blue, red, green.
How many combinations can you make?
That's an easy question, hey. 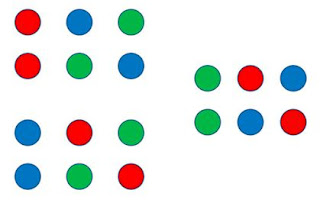 You do understand, when you have ten marbles then the number of combinations is a bit more. Well, that's math. But you get the point, as Nietzsche got: if matter is finite, then the number of configurations (a better word to serve our aim than combination) is finite. It's there where Nietzsche had this splendid idea, so comforting for all of you, die Ewige Wiederkehr. If you die, you may say to your beloveds: see you soon, because one thing since Nietzsche is certain: your body has a limited number of elements, it fits in a number of configurations of all the elements, so no doubt you will return - not in my realm, not in the house of my neighbor, no, on earth!

The only thing Nietzsche couldn't say, as neither mathematician you can tell is: when will it be?

What about the time between. That's where Jehovah and I enter the stage. When you die, your body will be dissolved and your elements flee, free to find some other elements to create new body's, either human, animal or merely something solid. And there you come, along the path to heaven, still a body - don't ask me why, I'm not a physician, but remember: you are only dust and still, when you look in the mirror there's some substance that makes your body a perfect body or a less perfect body - so there must be some substance which gives you a robust appearance, perhaps that substance stays with you. Some celestial dust maybe?

And yes, you do leave us. After some time. Unpredictable. By rapture. One day I'm talking with you. The next day you've disappeared. No one knows how, when and where. My neighbor has the same experience.
Probably your constituting elements have found each other and are asking, no, are demanding for your body. And wham, there you are again in your cradle!

NB
This is the fifth of a series of impressions of the dwellings of Jehovah and Satan
For the sixth impression follow the link porca miseria, where the hell are Pinamonti's marbles